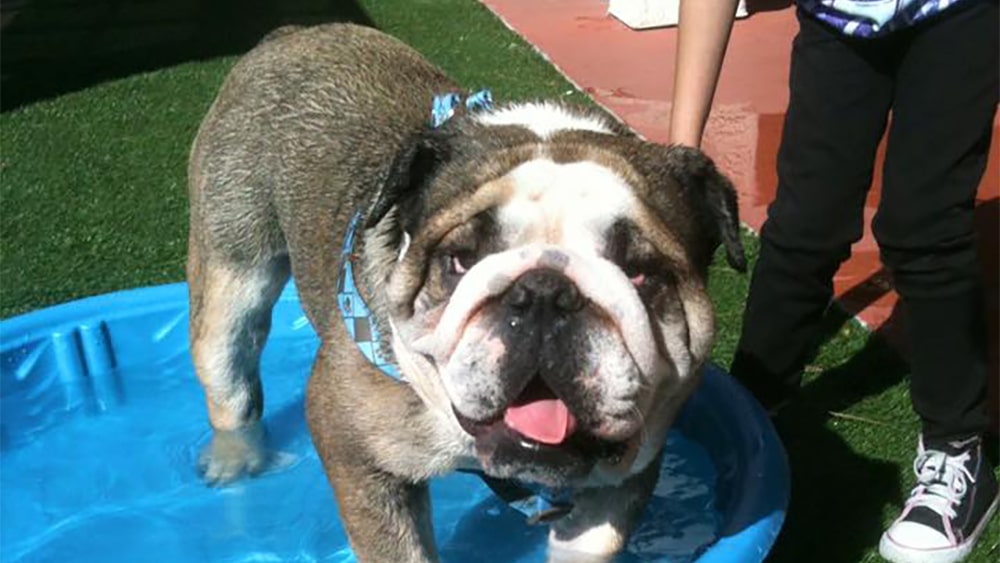 Sadly, another dog has died in the care of a pet sitter hired on an Uber-style app, this time Rover.com. Abraham Lazcano’s beloved bulldog, Gus Gus, drowned in an outdoor swimming pool after his Rover sitter left him unsupervised outdoors.

Abraham Lazcano has owned Gus Gus the dog for nearly seven years. He went out of town last month and hired a sitter through Rover, an online service. The sitter he chose had good reviews online.

Lazcano says his dog was left unsupervised one night in the sitter’s backyard and drowned in the pool.

13 Action News reached out to the sitter for comment. Over the phone, she admitted the dog was left alone in the backyard for a few minutes. She said the dog had pottied out back before without any problems and the area is well lit. She believes the dog had a medical episode and fell into the pool.

This is a horrible situation for any pet parent to come to terms with. Leaving your pet with a stranger while you travel is always going to be a worry, and answering the phone to news like this must be every pet owner’s worst nightmare. What can we learn from it?

We’ve already talked about Uber-style pet sitting apps like Wag and Rover. The fundamental problem with these apps is that they do not and will never have the time or resources to properly train and vet the sitters who register on their sites. It doesn’t matter what they claim about their hiring process, the fact remains that it is just simply not enough because they do not spend time out on the job with new sitters to observe them in a wide range of situations.

Rover, for example, gave the following statement in response to the loss of Gus Gus:

“…sitters go through a stringent approval process before listing their services. They must pass a general background check and a quiz about caring for dogs on Rover, provide detailed personal information, submit a profile about their pet care experience and pass a hand-review by Rover sitter quality specialists. We also monitor sitter behavior to ensure they continue to meet our standards, including quick response times to pet parents, positive Meet & Greet feedback, and customer ratings of 4 or 5 stars.”

Again we see that it’s not what they do that’s the problem – it’s what’s missing. Quizzes, profiles and “hand reviews” are all very well but they are no substitute for shadowing a prospective employee to get a sense of what kind of person they are, how they react to different situations, and to assess their general level of common sense around animals. “Response times to pet parents, meet & greet feedback and customer ratings” are all well and good, but these sound like the boilerplate customer service claims of an online tech company, not a pet care business. “Quick response times” are more related to logistics and efficiency than animal welfare. “Meet & greet feedback” is an aspect of customer relations, not pet safety. And “customer ratings” are only so useful, especially since online review systems are so easy to manipulate (and when the company itself is the one which publishes and controls the reviews).

Not once in the above statement from Rover do you hear anything about one-on-one training, which any pet sitting or dog walking company worth its salt carries out with all new employees.

So what could have been done to prevent the loss of Gus Gus?

Well, first of all, a representative of Rover could have visited the sitter’s home to assess its suitability as a venue for Rover.com pet care. Observing that the sitter had an outdoor pool (a potential risk for any unsupervised pet), they could have either decided that the home was unsuitable for Rover pet sitting, or they could have documented a communication with the sitter in which they noted the presence of the pool and had the sitter assure them that under no circumstances would any Rover client be left near the pool without strict supervision.

Secondly, when taking on a breed like a bulldog, they could have entered into a dialog with the sitter to ensure that they knew the characteristics and limitations of the breed. Specifically, they could have identified the fact that bulldogs are not good swimmers due to their shape and weight and that they should never be allowed around a pool or water source when unattended.

But none of those steps were taken – Gus Gus was apparently “just another client” in the care of a sitter who had not been hired with sufficient care, despite what any of these companies claim.