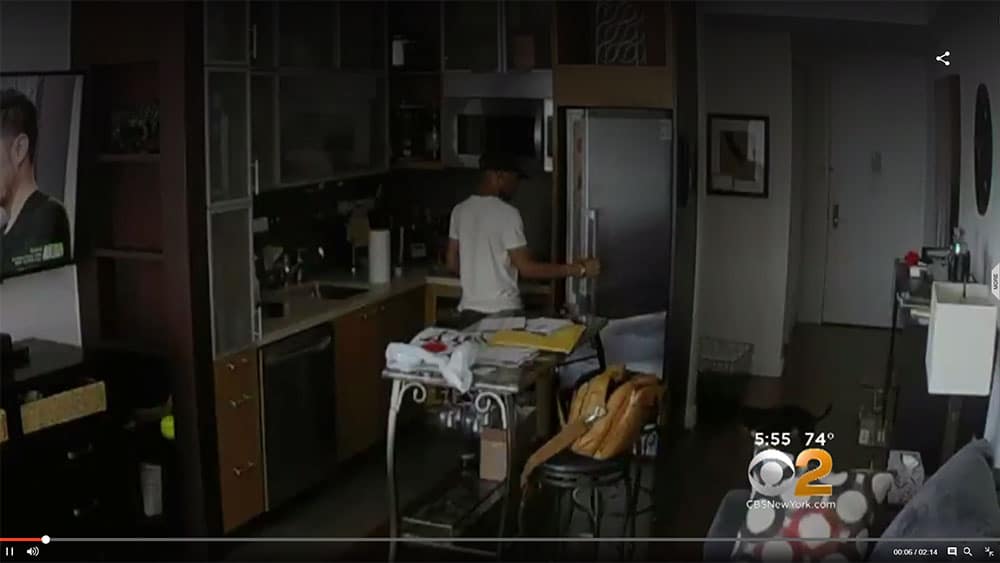 In another glaring example of why you should always hire a dog walker from a reputable dog walking company which properly vets and trains its employees, and not an “Uber for dog walkers” which uses independent contractors and is forbidden by law to train them properly, a walker registered to the Wag dog walking app has been caught on camera behaving, well, a little too relaxed for comfort in a client’s apartment.

CBS news has reported how a Wag dog walker  violated the privacy and hospitality of a client whose dog he was supposed to be walking.

The dog’s owner, CBS employee “Adam,” arrived home one day to find that his dog was acting funny. Like many  homeowners these days, Adam has a security camera set up in his apartment. So naturally, he decided to check the footage to see what was going on. What he saw would infuriate and disgust most people.

The Wag dog walker he had hired to walk his dachshund Rocco arrived at his home a full 90 minutes before the scheduled walk, and he proceeded to make himself at home, checked out the contents of Adam’s fridge, helped himself to a soda, snooped around the apartment and then put his feet up on the sofa to watch TV.

So did he actually take Rocco out? Well yes…for 10 minutes, which is 20 minutes less than the 30 minutes Adam had paid Wag for.

And to add insult to injury, he rounded things off by helping himself to (stealing) three beers from the fridge before leaving.

Adam said of the experience, “You sort of feel violated…that’s not what he’s supposed to be doing.”

The main problem with apps like Wag, as we’ve outlined before, is that they have a fundamental disconnect from their dog walkers and pet sitters. Since they use independent contractors instead of proper employees (which no doubt saves them millions in payroll taxes every year) , they are not permitted to train their walkers properly. And their business model, which involves maximizing profits for their Wall Street investors, means they just don’t have the time or resources to forge one-on-one relationships with their sitters.

In contrast, we spend a lot of time training and talking with our NYC dog walkers and pet sitters – first to make sure that they have the right personality and temperament for a job that involves such a high level of trust, and secondly to make sure that they understand things like the correct way to conduct themselves in a client’s home. This involves spending time out on the job with them, observing their manner and their behavior, and correcting anything which doesn’t meet our strict standards. And one of the first things we teach them is to presume that every home they enter has cameras watching them – because in this day and age, most do! That means no lingering or wandering around, no snooping, no going in rooms or closets unless they have the full consent of the owner, and definitely no laying around on the sofa treating the place like a hotel!

CBS contacted Wag three times by email and three times by phone, but didn’t receive a reply. We guess they’re not that excited about the spate of bad publicity they’ve had recently.

Adam has said that eventually, Wag apologized and offered him six months of free dog walking, in what is almost certainly an exercise in damage limitation. Whether he actually took up Wag’s offer given his experience with them, is anyone’s guess!