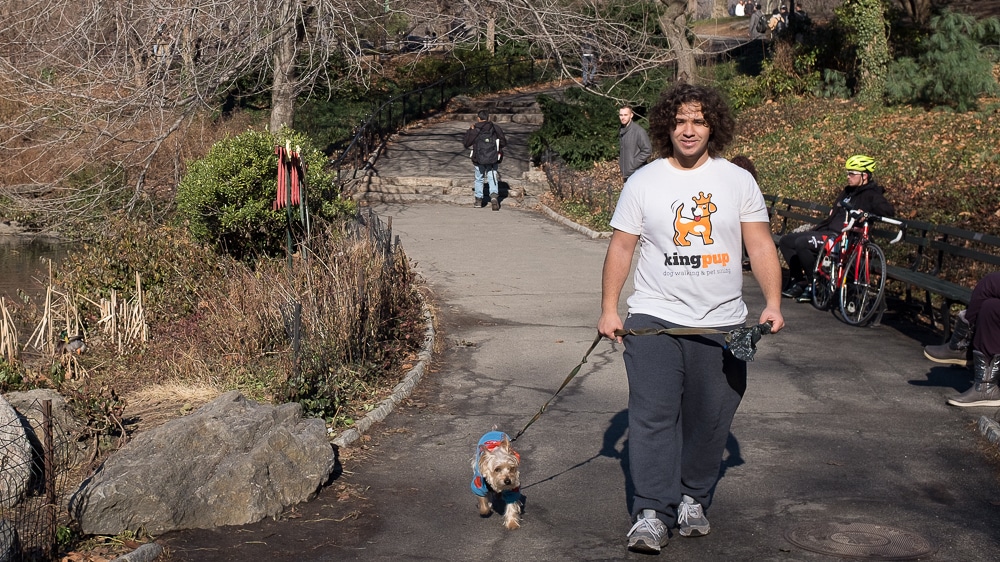 One question we get asked a lot is “why should we choose NYC dog walking versus daycare?” And it’s a fair question! With doggie daycare facilities popping up all over the place they’re obviously becoming more and more popular. At first glance, why wouldn’t you think that being in a room full of dogs all day would be wonderful for your pooch? They’re going to have a blast, right?

The truth is that it’s not as simple as that. The first thing to consider is: did dogs evolve to play in large packs, and are they comfortable with it? The answer to this is no, they didn’t evolve this way. Natural dog play is a one on one affair, and when you introduce more and more dogs into the activity then a complicated and sometimes negative dynamic emerges. Rivalries and alliances form, stronger dogs gang up on weaker dogs and there is a constant battle for dominance. Some dogs get frustrated at being left out, others feel threatened, and one or two emerge as the “leaders.” Fights are commonplace. While snarling and growling is a natural part of dog play, some dogs take it too far and lose the ability to distinguish between good-natured banter and outright aggression. Wires are crossed, feedback loops emerge and scraps break out. Usually they fizzle out, but sometimes they can escalate quite seriously and injuries occur.

As such, the kind of pack dynamic you find in a room full of dogs is something which should only be managed and supervised by very experienced dog professionals. While serious fights aren’t that frequent, they do occur and they require a qualified hand to manage. Unfortunately, in most cases this is not what you’re paying for at doggie day care. Whilst the staff are usually competent and caring, it’s very rare that day care facilities hire time served dog handlers. Often they’re paying a relatively low wage to people for whom the job is nothing more than a temporary gig between other jobs. Are they properly trained in breaking up serious fights, sometimes in situations in which they’re almost guaranteed to take a few bites themselves? When the staff-to-dog ratio is often as high as 1 staff member to 20 dogs, you’d better be pretty confident that nothing serious is going to break out.

At King Pup we’ve had a lot of clients over the years who have combined daycare and walks, sometimes setting aside a day or two per week for daycare. And unfortunately we’ve seen that injuries are all too commonplace – dogs coming home with anything from minor cuts and scrapes to outright bites requiring stitches. This started me thinking about the pros and cons of daycare, and led me to talk to a couple of qualified trainers for their opinions.

They both brought up a very interesting point: dogs, in their natural state, sleep a lot! And they need that sleep, especially when they’re young or old. But what happens at daycare is that they’re forced into a very noisy, chaotic environment in which it’s almost impossible to get the rest they need. Dogs are barking, puppies are whining and there are the inevitable scraps. The owner shows up at the end of the day, is delighted to be handed a tired puppy and thinks “How wonderful! She must have been playing and exercising all day!” The reality is that their dog hasn’t had anywhere near the amount of sleep they need. They’re worn out, stressed and wired. And that’s not good in the long run.

Contrast this with a schedule of daily dog walks. Our NYC dog walkers pair dogs up on the walks whenever possible so that they have a social element, a buddy to pal with every day. Friendships form, and maybe they have a little wrestle before the walk (and afterwards too!) They go out, they get a nice bit of exercise to break their day up, and then they come home and sleep it off. Depending on the schedule their owner has booked for them, maybe the walker comes back a second time too! Exercise, human contact, dog contact, back home to relax (and maybe chew a toy in peace without some other dog trying to steal it).

There is one more thing to consider – sickness. When there are viruses doing the rounds, a large room full of strange dogs is the first place your dog is going to become infected. We frequently take on dog clients whose owners have told us that they were getting sick too often at daycare. And it’s not just minor coughs and colds – parasites are commonplace. Giardia is commonly spread through the sharing of water bowls at daycare facilities. Parasites can be quite serious – we had a client some time ago whose dog ended up in emergency care with kidney failure because of parasites she picked up at daycare (another dog had them too), and the situation escalated to the point where the owner ended up in hospital after picking up the parasites from her dog. Horror stories like this aren’t that common, but it’s definitely something else to consider when deciding whether sitting in a room full of dogs is the best care solution for your pet.